A Collection of Gas Optimisation Tricks

In the Ethereum smart contract world, every single wei counts! Therefore, it could be very valuable to have a specific list/collection of multiple gas optimisation tricks at hand. And that is the ultimate goal of this thread: collecting various gas optimisation tricks, without compromising any security, that can be leveraged by anyone out there who appreciates gas savings.

I take the lead here and provide the first trick: Gas Optimisations for Infinite Allowances

One of the main ways of optimizing gas is reducing the number of storage slots that are used in a transaction. Using smaller types than uint256 to pack multiple values into one slot is a good way to achieve that. For example, you don't need 256 bits to represent a timestamp, 64 bits are more than enough. Remember to use SafeCast to be extra sure though!

Pretty basic but essential, extracted from the Solidity documentation:

Compared to regular state variables, the gas costs of constant and immutable variables are much lower. For a constant variable, the expression assigned to it is copied to all the places where it is accessed and also re-evaluated each time. This allows for local optimizations. Immutable variables are evaluated once at construction time and their value is copied to all the places in the code where they are accessed. For these values, 32 bytes are reserved, even if they would fit in fewer bytes. Due to this, constant values can sometimes be cheaper than immutable values.

There are also good resources available (I think it is a good idea to have this thread here on OpenZeppelin which is currently the main SC reference, which gathers all the tricks) such as blog posts or even better, research papers investigating this topic. A good and well structured one from Cagliari University is available at: 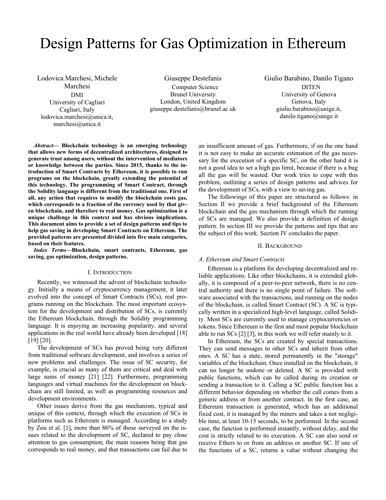 PDF | On Feb 1, 2020, Lodovica Marchesi and others published Design Patterns for Gas Optimization in Ethereum | Find, read and cite all the research you need on ResearchGate

Also a beginner level one, but it adds up.

If there's a state variable you'll read from more than once in a function, it's best to cast it into memory.
So, instead of:

you'd be better off with:

You can cut out 10 opcodes in the creation-time EVM bytecode if you declare a constructor payable. The following opcodes are cut out:

In Solidity, this chunk of assembly would mean the following:

Harikrishnan Mulackal wrote a great summary about gas optimisations here. I mirror everything here to have everything in one place.

Caching the length in for loops

Consider a generic example of an array arr and the following loop:

In the above case, the solidity compiler will always read the length of the array during each iteration. That is,

This extra costs can be avoided by caching the array length (in stack):

In the above example, the sload or mload or calldataload operation is only called once and subsequently replaced by a cheap dupN instruction. Even though mload , calldataload and dupN have the same gas cost, mload and calldataload needs an additional dupN to put the offset in the stack, i.e., an extra 3 gas.

This optimization is especially important if it is a storage array or if it is a lengthy for loop.

Note that the Yul based optimizer (not enabled by default; only relevant if you are using --experimental-via-ir or the equivalent in standard JSON) can sometimes do this caching automatically. However, this is likely not the case in your project. Reference. Also see this.

Use calldata instead of memory for function parameters

In some cases, having function arguments in calldata instead of memory is more optimal.

In the above example, the dynamic array arr has the storage location memory . When the function gets called externally, the array values are kept in calldata and copied to memory during ABI decoding (using the opcode calldataload and mstore ). And during the for loop, arr[i] accesses the value in memory using a mload . However, for the above example, this is inefficient. Consider the following snippet instead:

In the above snippet, instead of going via memory, the value is directly read from calldata using calldataload . That is, there are no intermediate memory operations that carry this value.

Gas savings : In the former example, the ABI decoding begins with copying value from calldata to memory in a for loop. Each iteration would cost at least 60 gas. In the latter example, this can be completely avoided. This will also reduce the number of instructions and therefore reduce the deployment time cost of the contract.

In short, use calldata instead of memory if the function argument is only read.

Note that in older Solidity versions, changing some function arguments from memory to calldata may cause “unimplemented feature error”. This can be avoided by using a newer ( 0.8.* ) Solidity compiler.

State variables that can be set to immutable

Solidity 0.6.5 introduced immutable as a major feature. It allows setting contract-level variables at construction time which gets stored in code rather than storage.

In the above example, each call to the function owner() reads from storage, using a sload . After EIP-2929, this costs 2100 gas cold or 100 gas warm. However, the following snippet is more gas efficient:

In the above example, each storage read of the owner state variable is replaced by the instruction push32 value , where value is set during contract construction time. Unlike the last example, this costs only 3 gas.

The string str is split into 32-byte sized chunks and then stored in memory using mstore , then the memory offsets are provided to revert(offset, length) . For chunks shorter than 32 bytes, and for low --optimize-runs value (usually even the default value of 200), instead of push32 val , where val is the 32-byte hexadecimal representation of the string with 0 padding on the least significant bits, the solidity compiler replaces it by shl(value, short-value)) . Where short-value does not have any 0 padding. This saves the total bytes in the deploy code and therefore saves deploy time cost, at the expense of extra 6 gas during runtime. This means that shorter revert strings save deployment time costs of the contract. Note that this kind of saving is not relevant for high values of --optimize-runs as push32 value will not be replaced by an shl(..., ...) equivalent by the Solidity compiler.

Going back, each 32-byte chunk of the string requires an extra mstore. That is an additional cost for mstore , memory expansion costs, as well as stack operations. Note that, this runtime cost is only relevant when the revert condition is met.

Overall, shorter revert strings can save deploy time as well as runtime costs.

Note that if your contracts already allow using at least Solidity 0.8.4, then consider using Custom errors. This is more gas efficient while allowing the developer to describe the errors in detail using NatSpec. A disadvantage to this approach is that some tooling may not have proper support for this.

The increment in for loop postcondition can be made unchecked

(This is only relevant if you are using the default solidity checked arithmetic.)

Consider the following generic for loop:

In this example, the for loop postcondition, i.e., i++ involves checked arithmetic, which is not required. This is because the value of i is always strictly less than length <= 2**256 - 1. Therefore, the theoretical maximum value of i to enter the for-loop body is 2**256 - 2. This means that the i++ in the for loop can never overflow. Regardless, the overflow checks are performed by the compiler.

Unfortunately, the Solidity optimizer is not smart enough to detect this and remove the checks. One can manually do this by:

Note that it’s important that the call to unchecked_inc is inlined. This is only possible for solidity versions starting from 0.8.2.

Gas savings: roughly speaking this can save 30-40 gas per loop iteration. For lengthy loops, this can be significant!

EDIT from pcaversaccio: As an alternative one can also use the following:

Solidity 0.8.4 introduced custom errors. They are more gas efficient than revert strings, when it comes to deployment cost as well as runtime cost when the revert condition is met. Use custom errors instead of revert strings for gas savings.

Use != 0 instead of > 0 for unsigned integer comparison

When dealing with unsigned integer types, comparisons with != 0 are cheaper then with > 0 .

Use shift right/left instead of division/multiplication if possible

While the DIV / MUL opcode uses 5 gas, the SHR / SHL opcode only uses 3 gas. Furthermore, beware that Solidity's division operation also includes a division-by-0 prevention which is bypassed using shifting. Eventually, overflow checks are never performed for shift operations as they are done for arithmetic operations. Instead, the result is always truncated. 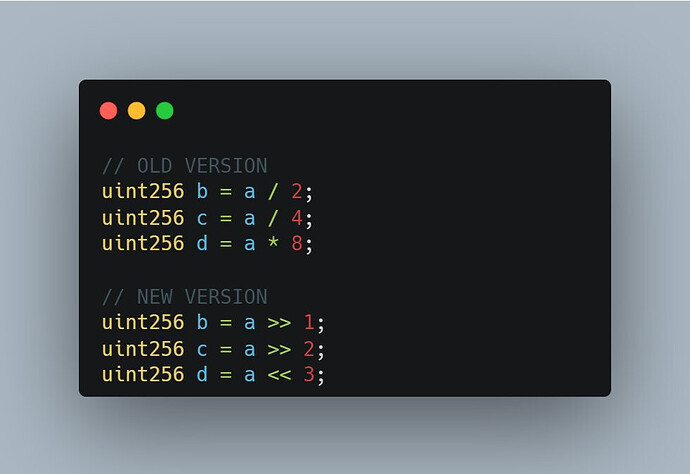 What does this kind of manual packing offer over a packed struct like the one you showed?

In your code you're using unsafe casting, e.g. from uint to uint8 for bulkMultiplier. You should somehow encode the assumption that it will always fit in a uint8: use a uint8 variable for that value everywhere, and when needed to convert from a larger integer size use OpenZeppelin's SafeCast library.

I checked and effectively proper packed struct works at the same gas cost even lower! Thanks for the advice. It still was a nice exercise

The usage of != over < is 3 GAS cheaper (even with Solidity version 0.8.17). Be careful to apply it only in situations where it doesn't represent a security risk!

@pcaversaccio Have you tested with viaIR? In my experience both operators result in the same final bytecode when using viaIR. That said it's still not 100% ready to use.

The gas costs are the same. 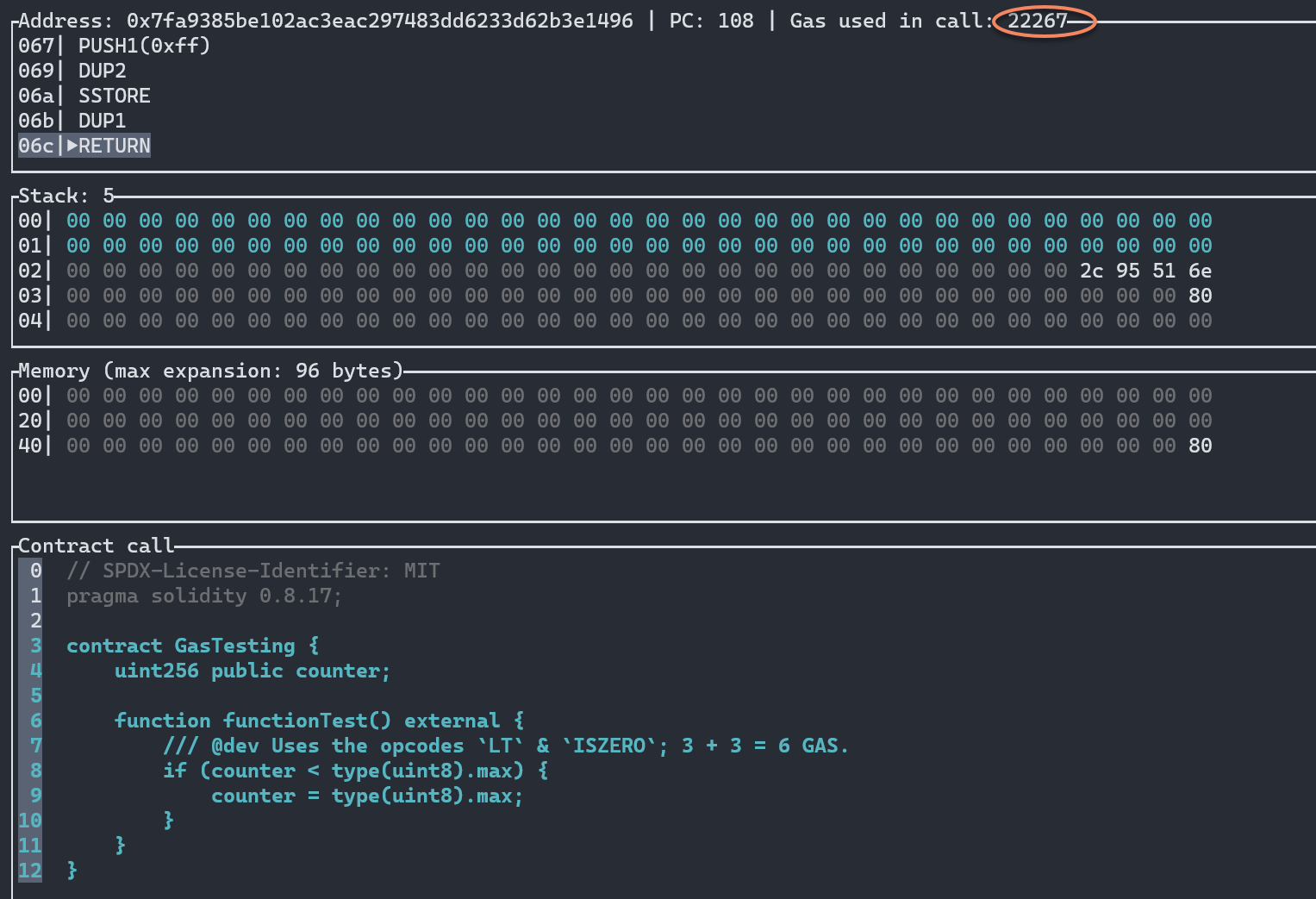 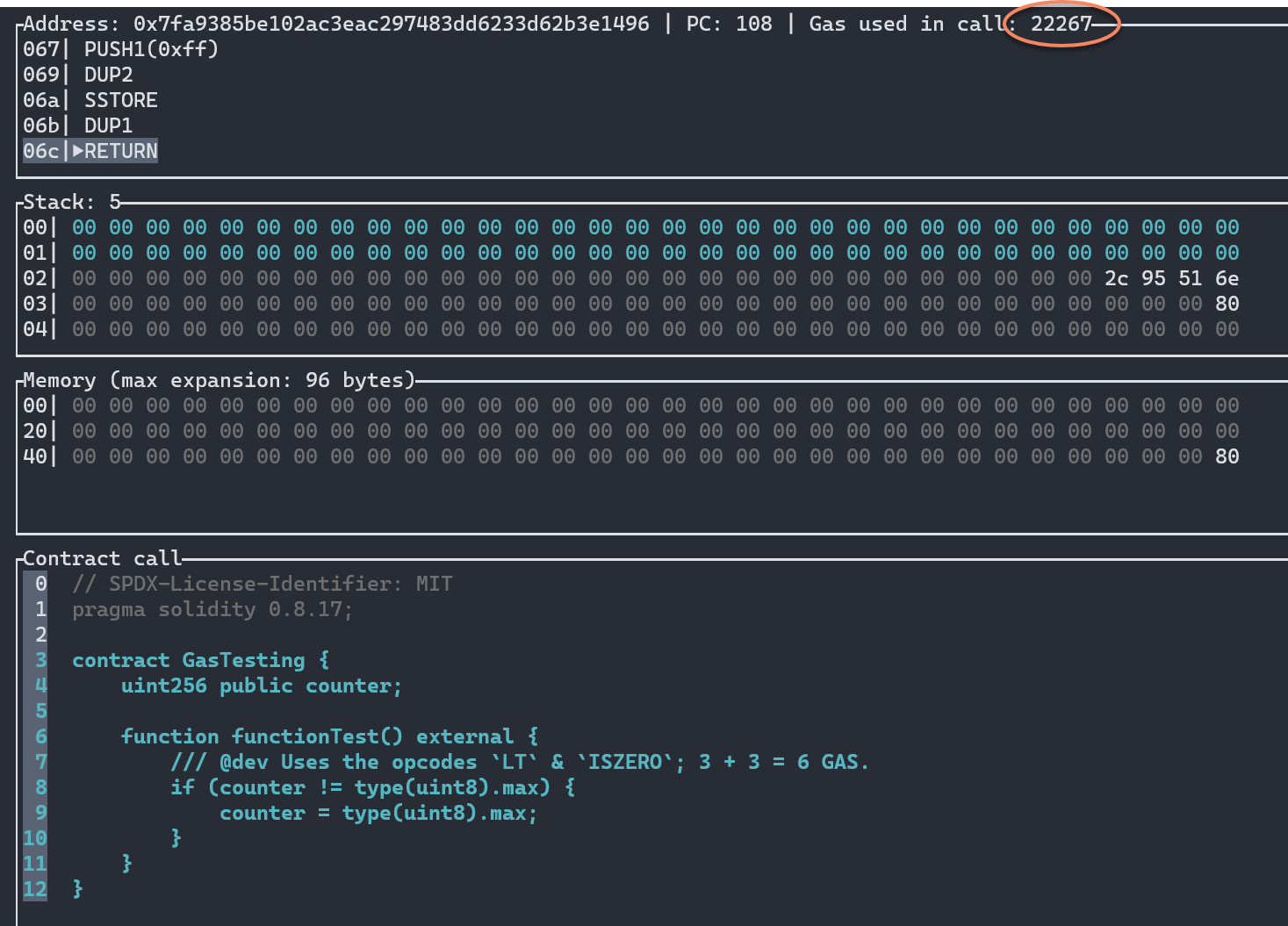 However, there is a difference in the opcodes as it seems: 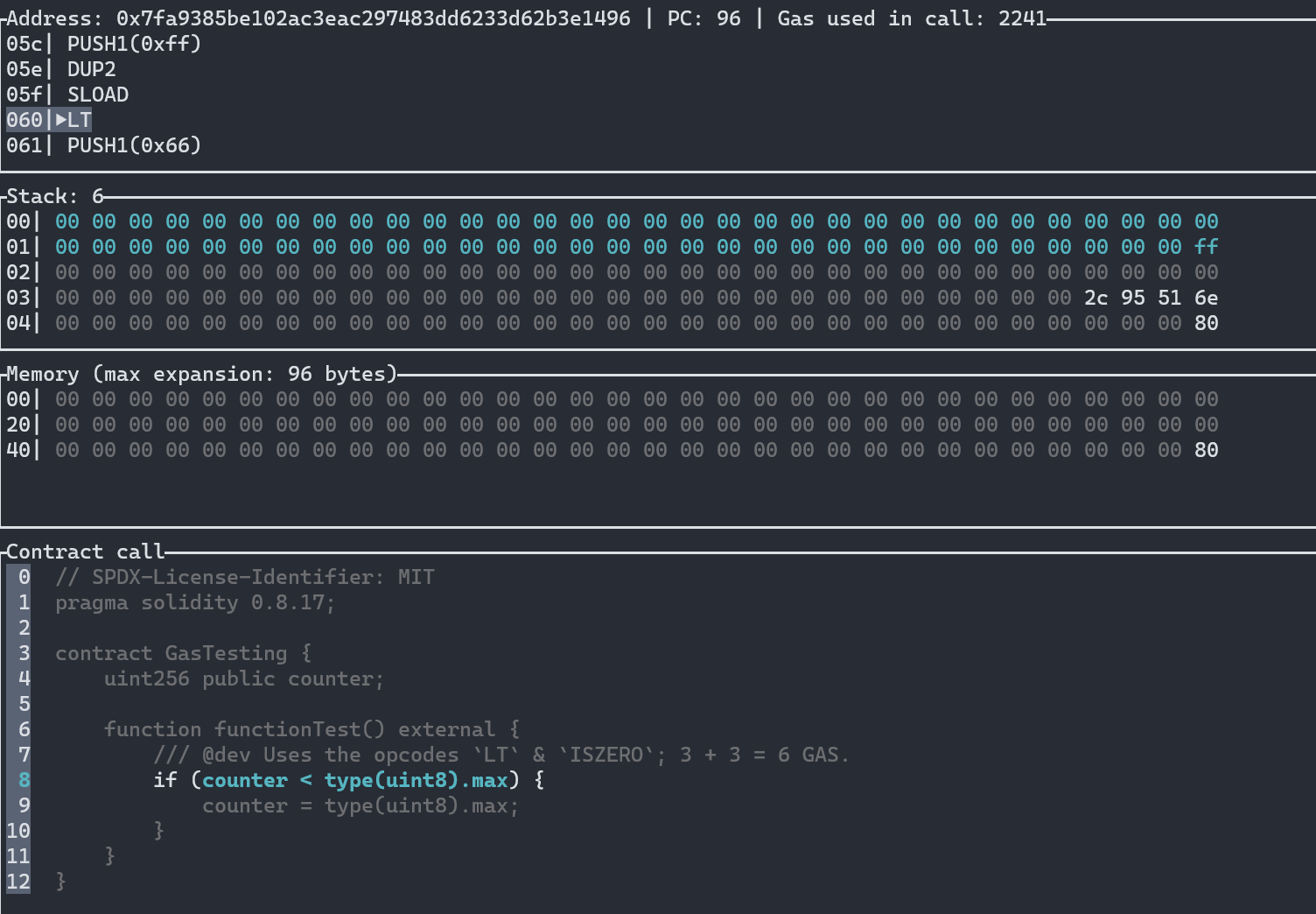 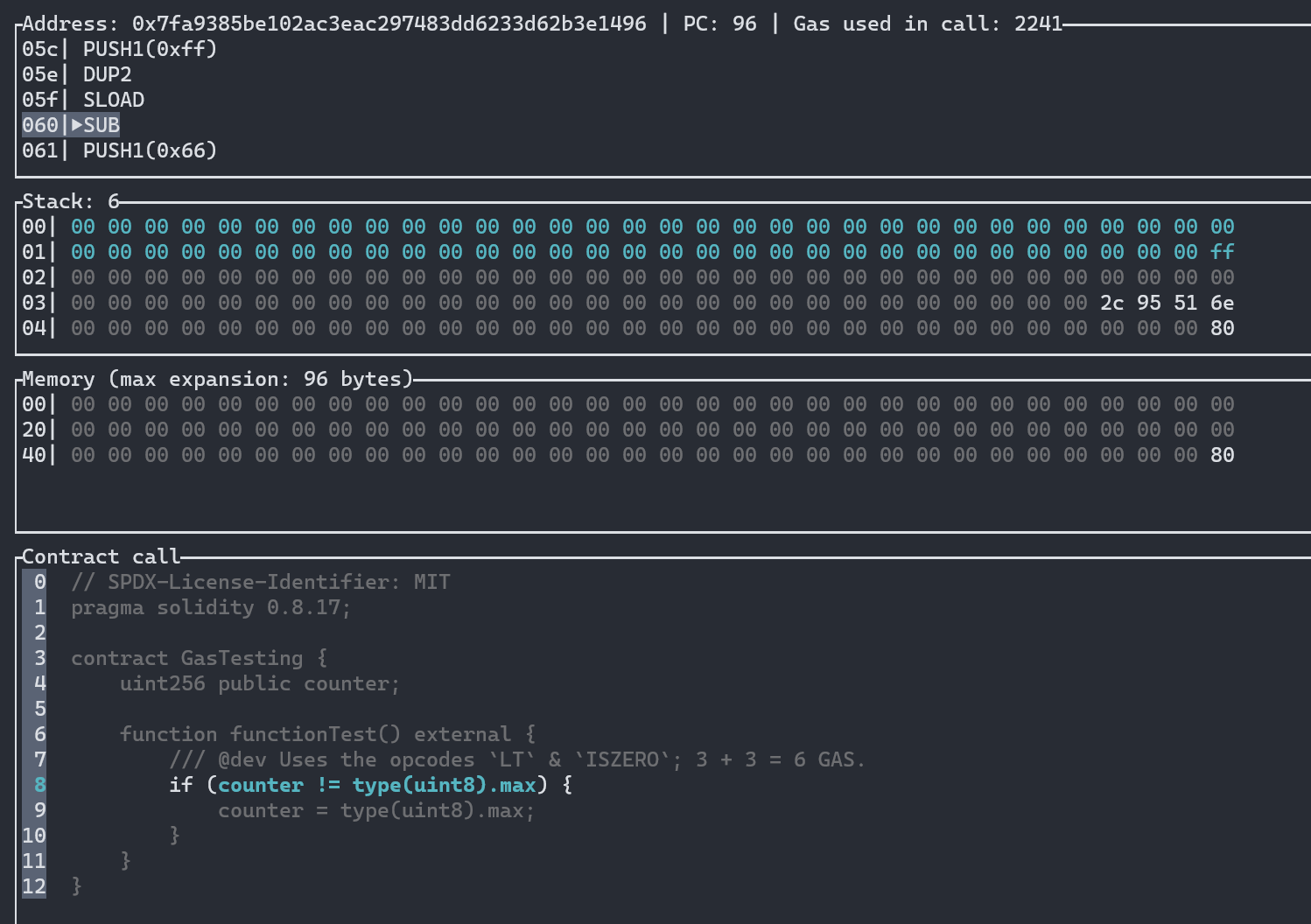 I just don't feel like recommending viaIR right now due to the recently found bugs that led to Solidity version 0.8.17 ultimately.

Can I ask what IDE/plugins you were using to get the printout in your pics?

. Similarly, you could use hevm, which is however deprecated. See the comments in my gist here on how to use it in an example.

Ah, I've never used Foundry (generally develop with Hardhat). I get a lot of that information generated using different hardhat plugins but the terminal output just looked nice. I'll have to play around with Foundry one of these days.