I am having two contracts A and B.

Contract A is a base contract which is deployed by us and Contract B is deployed with the help of frontend (button click) by users of the application.

Read about this - Creating New Instances From Your Contract Code

But here, although they're using ERC20Upgradeable contract but they're saying to first create it and then inject it. I'm not able to understand how to compare this thing with our contract logic.

actually i still don't get it what you mean but my assumption is that you want to make a proxy contract using A.sol (using method "new") and use B.sol as base contract. and the problem is after contract "newB" is created, you can't modify the name & title as the constructor arguments of its contract.

i did test on remix: 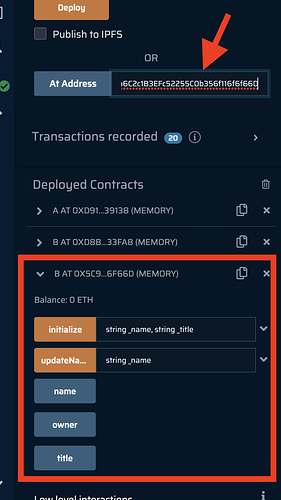 that's all. hope it helps your problem.

Thanks for the solution.
Btw, we already found about BeaconProxy and decided to go with it. It looks like a great method in which the upgrade part is also easy.